Yakpossess a massive body due to which it is slow in walking and trekker are requested not to mistook the extreme hospitality of this majestic animals as its laziness and weakness. Real travelers are always in search of real life experiences and yak trek can bestow you it. Yak trek is rarely carried out and there are only few numbers of agencies who organize it on prior booking. While in Ladakh enjoying a trek with yak bring you closer to local culture and lifestyle that locals lead in Ladakh. 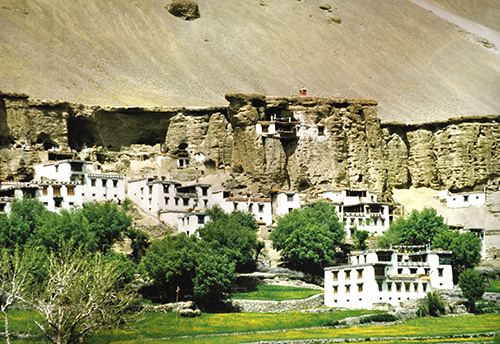 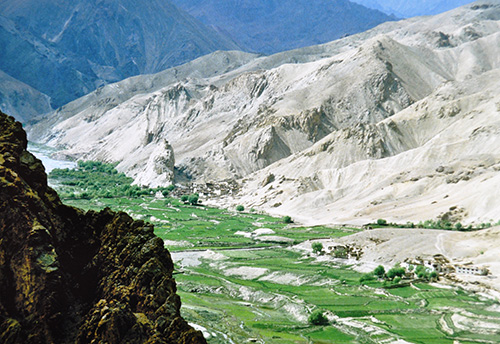 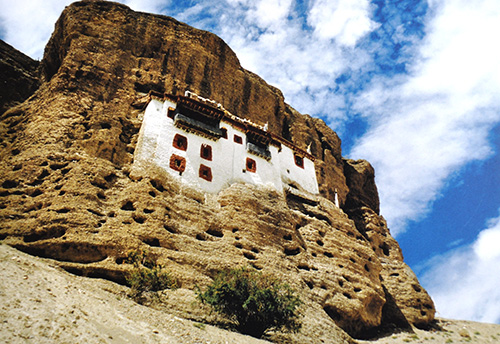 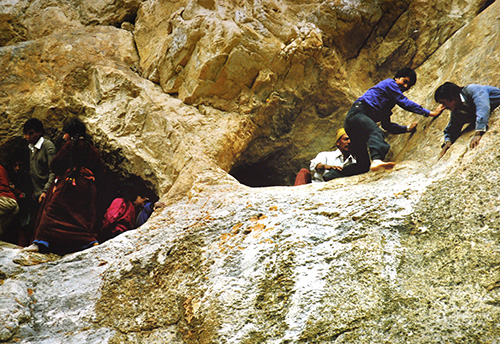 Day 1, Arrival Delhi International airport, transfer to Hotel O/N Hotel, it is depend on your flight, arriving evening or morning, if your flight is in the morning, after lunch visit Old Delhi O/N Hotel

Morning transfer to Domestic airport for your on board fly to Leh one hrs journey, during you fly very exciting view of great Himalayan mountains, you can see right side K 2 peaks and Left side Nun Kun peaks, and many more peaks, arrival at Leh transfer to Hotel, after rest for acclimatization O/N Hotel.

After breakfast drive and visit Pheyng  Monastery is funded in 1350-1375 AD, it is Digong Red sect Order monastery , one room is nice wall painting, after visit Guru lakhang, a small chapel belong to local family, in side of the chapel very beautiful wall paintings from 12th 13th century.

After drive to Spituk pharka ancient natural Meditation cave (Tragkhung Kowache) in side the cave beautiful wall paintings, 10th 11th century, some paintings are not very visible due to smoky from batter lamps. After visit Spituk monastery it is yellow sect order, it was built 11th century, about 80-90 monks residence there, many sculptures and wall paintings to see.

After breakfast drive enroot visit Basgo castle and monastery, built 1350 century, inside   one chamber two store copper  gilt  Maitreya future Buddha and upper  chamber two store Buddha  made of clay and there is wonderful wall paintings.  After visit Liker monastery outside of the landscape is nice with three store Buddha to seen the monastery was built 1065 century there is new paintings 500 year old and.

After lunch drive to Alchi transfer to Hotel after rest visit oldest Alchi  monastery and world famous wall paintings it is built 990 century by Lotseawa  Renchan zangpo, the art is Bahamian or Gander  still, the artist brought from Kashmir, O/N Hotel  at Alchi.

After breakfast drive enroot visit Rizong Monastery and lamayuru monastery, and wonderful landscape, after drive over Phatula pass, entering valley drive in the deep gorge of Kanji valley. Kanji is most remote and very beautiful village in center of four valleys, locally its name Kanji mines the village under four pillars. There is a small monastery but it is very old build 990 century. O/N Camp

After breakfast trek one hrs down form the village and entering in the left valley narrow gorge after gradually ascent to Timti la pass, from the pass very beautiful view of colorful mountains and gradually descent camp of Skamlung O/N Camp

After breakfast easy day trek, gently ascent very colorful mountains to see, camp in between two mountains evening walk to Yogma village and back to camp.

after breakfast one hrs easy trek after gradually ascent to Srbatan la pass, from the pass wonderful of Zanskar gange and the great Himalaya range, after easy descent camp near small river O/N Camp

From the camp easy trek along the wakha chu, River, very beautiful Kurberu village after short walk visit Rgyal Monastery, Rgyal an interesting hilltop village that appease like a medieval settlement cave dwellings. Its mad house, neatly white washed and closely stacked, arebuilt around cavees dug into theface of a vertical cliff rising high above the valet floor. A small monastery similarly constructed and occupying the top of the brown hillside, completes this interesting Buddhist village, breathtaking view of the undulating hills crowned by rocky peaks and surroundings.  O/N Camp

After breakfast easy walk to Shargol. Another picturesque village of the area, Shargol has mixed population of Muslim and Buddhist, after short walk to Phokhar village the main attraction for visitors is a cave monastery visible from afar as a white speck against the vertically rising brown hillside from which it appears to hang out. Down below is a Buddhist nunnery with about a dozen incumbents. From Phokhar 2hrs walk to Uryan Dzong a meditation retreat tucked deep inside the surrounding mountains. This natural mountain fortress conceals circulars tableland with   a small Buddhist monastery at its center, while the surrounding hillside reveal several  caves where high ranking Buddhist saints  are believed to have meditated in seclusion. At least one such cave is associated with the visit Guru Padmasambhava, the patron saint of Tibetan Buddhism.

After trek back to Shargol O/N Camp

Day 11, Shargol to Leh on the way visit Mulbek Chamba and monastery.

After breakfast short drive visit you will reach Mulbek on the Leh Srinagar high way, on the road side visit Chamba , 9 m high rock sculpture in deep relief of the ( Maitreya Buddha) which reflecting an interesting blend of esoteric salivate symbolism with  early Buddhism art. After visit ancient monastery on top of the rock after drive to Leh on the way see bothkharbu village and Lamayuru back Lek O/N Hotel

After breakfast transfer to Leh airport and fly to Delhi, arrival ar Delhi morning 9:30 am, transfer to Hotel, after refreshment visit old Delhi, New Delhi evening after Dinner transfer to International airport for your on board, fly with sweet memory of Ladakh Yak trek in the isolated village.

Dear Angchuk The Great Global Expedition / Ladakh Eco Tour And Trek This summer me and my beloved Linda had the chance to participate to a .. Croci Gianluca and Linda From Switzerland
We recommend for this company. We had been trekking with him many years ago and would like to contact him. We are to ladies from Switzerland - .. Susanne Feddern and Pia SieberFrom
View all